Hydrogen is the smallest and lightest element in the universe among all the elements discovered so far. It has one electron and one proton. It has three isotopes, i.e protium, deuterium, and tritium. It is also an important part of many biomolecules like proteins, DNA, carbohydrates, etc. In nature, it is available as natural gas but in pure form, it is highly inflammable. In the modern periodic table, its position is not fixed because it belongs to s-block but its properties resemble the non-metals.

Hydrogen has various important real-life applications as mentioned below:

Overview of the Chapter

Hydrogen is one of the important element in the universe. In nature, it exists in dihydrogen form as H2. In this article, you will study the various insights about this chapter and preparation tips.

The position of Hydrogen in the periodic table:

Hydrogen is placed in the first position of the periodic table. However, its actual position is always has been a matter of discussion in science. Its electronic configuration is 1s1, which means either it requires one more electron to completely fulfill the s orbital or it can lose one electron. Thus Hydrogen behaves like alkali metals and halogens. Like alkali metals, Hydrogen forms halides, oxides, and sulphides. But in terms of ionization enthalpy, Hydrogen resembles more to halogens than alkali metals.

As you all must know from your earlier classes, Hydrogen has three isotopes: protium, deuterium and tritium. Protium has no neutron, deuterium has 1 neutron and tritium has 2 neutrons. Since the electronic configuration of all these isotopes is same therefore chemical properties of these isotopes are same. However, their physical properties are considerably different from each other.

(ii) Chemical Properties:
The bond dissociation enthalpy of dihydrogen is very high thus, it is very inert at room temperature.

Water
Water is present on the earth in a tremendous amount. In the human body, it is available up to 70% and in some fruits like watermelon, it is present up to 96%. On earth, it is present in various forms as given in the table:

Water has the bent structure with 104.50 bond angle and 2 lone pair of electrons on the oxygen atom. It is a highly polar molecule and forms hydrogen bonding with other water molecules. The structures of water are depicted in fig below: 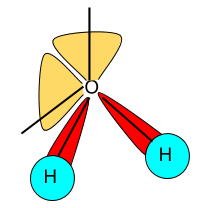 Hard and Soft Water
When salts of calcium and magnesium are dissolved in the water then it is called as hard water, but when these salts are not present in the water then it is known as soft water. Hard water does not form lather with soaps but soft water forms lather. For washing in hard water, soaps are not efficient and thus we use detergents. With proper water treatment, this hardness of water can be removed.

Hydrogen Peroxide(H2O2)
Hydrogen peroxide is one of the most important compound which is used in the pollution control treatment. Some of the important physical properties of hydrogen peroxide are given in the table as below:

Dihydrogen as a fuel

Dihydrogen can be used fuel as on combustion it produces a tremendous amount of heat. The combustion of dihydrogen can produce almost three the energy as produced by petrol. Also, the pollutants released are also lesser than petrol. The only pollutant from dihydrogen released is oxides of dinitrogen, but this problem can be solved very easily by using a little amount of water. This addition of water will reduce the temperature and thus the reaction between nitrogen and oxygen will not take place.
But using dihydrogen gas as a fuel has some limitations. The cylinder of compressed dihydrogen gas weighs almost 30 times heavier than a petrol tank. Also, converting dihydrogen to the liquid state requires cooling to 20K. Thus it requires expensive insulated tanks.

How to prepare for Hydrogen?

First, you must finish the class XI and XII NCERT textbook and solve each and every example and unsolved question given in it. Then for advanced level preparation like JEE and NEET, you must follow O.P. Tandon. You must definitely solve the previous year papers. Meanwhile, in the preparation, you must continuously give the mock tests for the depth of knowledge. Our platform will help you to provide with the variety of questions for deeper knowledge with the help of videos, articles and mock tests.