What is Vector Algebra

Vector Algebra is defined as the mathematical operations done on vectors, which is further the foundation of modern-day 3D gaming, animation and widely used in modern physics. At the JEE level, Vector Algebra is simple to understand. Every year you will get 1 - 2 questions in JEE Main exam as well as in other engineering entrance exams. This chapter helps you in 3-D Geometry and Physics (Kinematics, Work, Energy and Power, electrostatics, etc.). Importance of this chapter can be seen from Physics where you learn why any quantity is scalar or vector? A little mistake in vector algebra costs you negative marks. As compared to other chapters in maths, Vector Algebra requires high accuracy to prepare for the examination. Once you start learning vector algebra you will become familiar with the application of vectors and it helps you to solve the problems based on 3-D geometry and basics used in physics.

Suppose you are playing hide n seek game and one of your friends gives you a hint that he is 5 steps away from you. Would you be able to catch him??

This will take you many more tries as you are not aware of the direction.

Suppose, he is behind you and you start moving in the forward direction. What happened?? Distance will start increasing between both of you.

What if he tells you that he is in front of you?

Now you can easily catch him as you know the direction as well as the magnitude of the distance of your friend. That's how we make use of vectors in real life unknowingly.

There are many more examples like computing the direction of rain, flight of a bird and the list is never-ending.

Well, all the answers to these questions you will able to tell when you study Vector Algebra.

After reading this chapter  you will be able to:

Vector- In general terms, a vector is defined as an object having both directions as well as magnitude.

Position vector- Consider a point P in space, having coordinates (x, y, z) with respect to the origin O (0, 0, 0). Then, the vector

having O and P as its initial and terminal points, respectively, is called the position vector of the point P with respect to O. 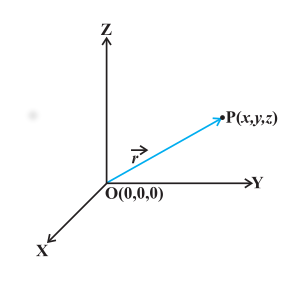 Direction Cosines- The position vector of a point P(x, y, z). The angle α, β, and γ made by the vector with the positive direction of x, y, and z-axes respectively, are called its directions angles. The cosine values of these angles, i.e., cos α, cos β, and cos γ are called direction cosines of the vector and usually denoted by l, m, and n, respectively.

Zero Vector: A vector whose initial and terminal points coincide, is called a zero vector (or null vector). Zero vector can not be assigned a definite direction as it has zero magnitudes. Or, alternatively, otherwise, it may be regarded as having any direction. The vector

Unit Vector: A vector whose magnitude is unity (i.e., 1 unit) is called a unit vector. The unit vector in the direction of a given vector

is denoted by â.

Collinear Vectors: Two or more vectors are said to be collinear if they are parallel to the same line, irrespective of their magnitudes and directions.

are said to be equal, if they have the same magnitude and direction regardless of the positions of their initial points, and written as

Negative of a Vector: A vector whose magnitude is the same as that of a given vector (say,

), but the direction is opposite to that of it, is called negative of the given vector.

Addition of two vectors simply means displacement from a point A to point B.

In general, if we have two vectors

of two vector is,

Points to be remember

Multiplication of vector with a scalar

The product of the vector

is collinear to the vector

has the direction same or opposite to that of vector

If a vector is represented as

then it is called component form. Here,

representing the unit vectors along the

x, y, and z-axes, respectively and (x,y,z)  represent coordinates of the vector.

are any two vectors given in the component form

When point R divides \vec{PQ} internally in the ratio of m:n such that

externally in the ratio of m:n such that

Multiplication of two vectors is defined in two ways (i) Scalar (or dot) product and (ii) Vector (or cross) product.

In vector product resultant is a vector quantity.

. Scalar product is calculated as

where, θ is the angle between two non zero given vectors.

Projection of a vector

. Scalar product is calculated as

where θ is the angle between two non zero vectors and \hat{n} is a unit vector perpendicular to both.

How to prepare Vector Algebra?

Vector Algebra is one of the basic topics, you can prepare this topic by understanding a few basic concepts

First, finish all the concepts, example and questions given in NCERT Maths Book. You must thorough with the theory of NCERT. Then you can refer to the book Cengage Mathematics Algebra. Vector Algebra is explained very well in this book and there are ample amount of questions with crystal clear concepts. You can also refer to the book Arihant Algebra by SK Goyal or RD Sharma. But again the choice of reference book depends on person to person, find the book that best suits you the best depending on how well you are clear with the concepts and the difficulty of the questions you require.