How to prepare Chemical Effects of Electric Current for

Letus perform an activity to test whether the liquid will conduct electricity.

Precaution: Do not use electric supply from the mains or a generator or an inverter. Use only electric cells (battery)

Required Materials: A torch bulb or led, connecting wires with insulations, insulation tapes, a battery, lemon juice in a small top of a plastic bottle or rubber top

How to connect: Connections are shown in the figure below. 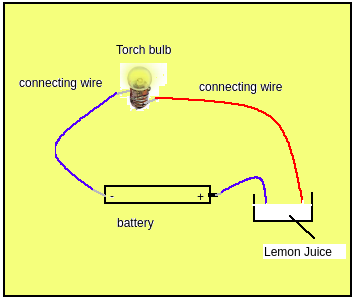 Conclusion: The torch bulb/led will glow, which indicates that there is a passage of electricity through the lemon juice.

Note: If the torch bulb is not glowing use led. Since led will glow for a small amount of current also

In the above experiment, we have used a tester with a torch bulb/led. In the earlier classes, we have studied that Electric current produces a magnetic field. If we keep a compass needle near a current-carrying wire the needle deflects even if the current is very small.

Using the above idea we can construct a tester.

Note: Instead of bulb tester we can use this tester which uses the magnetic effect of current (as shown in figure 2). This tester can detect a very small amount of current also. 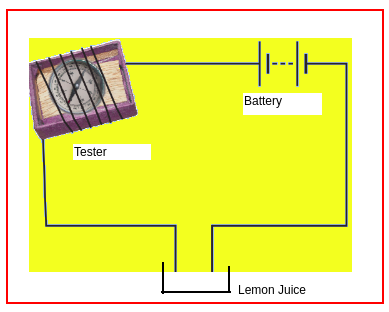 Notes: Instead of lemon juice, we can take tap water, vinegar, milk etc and test whether they will conduct electricity.

When current passes through a solution there are some changes happening inside the solution. Let us understand this through an activity 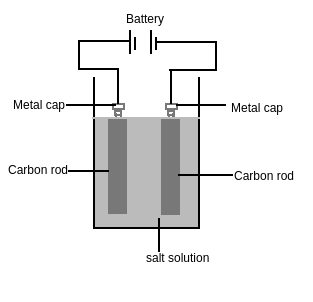 Observations: We can see formations of a bubble near the electrodes. We can say that some chemical changes are occurring in the solution.

Important note: When we pass an electric current through a conducting solution chemical reactions takes place inside the solution. As a result of this chemical reaction, bubbles are formed near electrodes, a metal deposit may be seen on electrodes, there may be some change in the colour of the solution. These are some chemical effects of electric current. The effect depends on the type of solution and electrode used.

How to determine the positive terminal of a concealed battery or cell using potato?

Take a potato and cut it into two halves, take one half and connect it to the tester as shown in figure 4. Observe the potato after some time (say 30 minutes). Note down your observation. 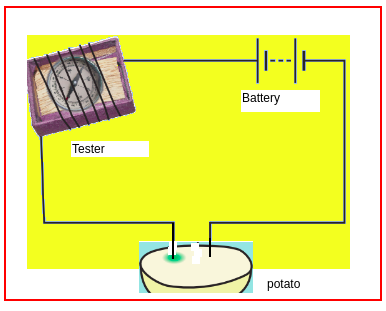 The process of depositing a layer of any desired metal on another material using electricity is called electroplating. Electroplating is one of the important application of the chemical effect of electric current. To understand how electroplating is done let us see a simple experiment which can be done in the laboratory. 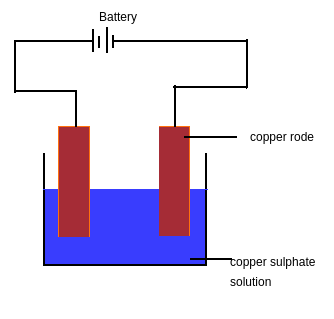 Reason for the above observations:

Note: If we do the experiment by replacing the copperplate in the negative terminal of the battery with carbon rode we can find copper deposits (reddish-brown)  on the carbon rode.

In this chapter, we have learned about the chemical effect of electric current and its applications.