(a) Explain, using a suitable diagram, how unpolarized light gets linearly polarized by scattering.

(b) Describe briefly the variation of the intensity of transmitted light when a polaroid sheet kept between two crossed polaroids is rotated. Draw the graph depicting the variation of intensity with the angle of rotation. How many maxima and minima would be observed when

(a) When the light encounters the molecules of the atmosphere, the electrons in molecules acquire components of motion under the influence of the electric field.

Charges accelerated parallel to the double arrows do not radiate energy towards the observes since their acceleration has no transverse component.

The Radiation scattered by the molecules is thus polarized light. 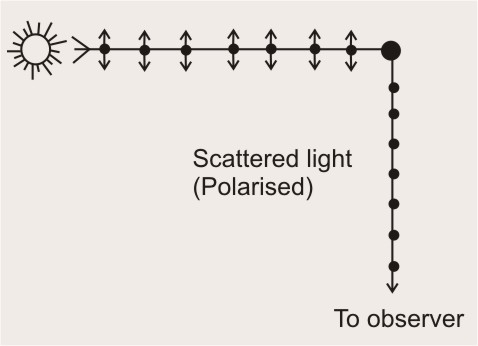 be the intensity of polarised light after passing through polarized

Therfore intensity of polarized light after passing through

are crossed, hence, the angle between their pass axis will be

The graph depicting the variation of intensity with the angle of rotation:-

There are two maxima and two minima, when

If the light is unpolarised then maximum intensity is

If the light is polarised then maximum intensity is

This course will help student to be better prepared and study in the right direction for NEET..