(b) Derive expression for the emf induced across the ends of a straight conductor of length l moving right angles to uniform magnetic field B with a uniform speed v.

(c) Obtain expression for the magnetic energy stored in a solenoid in terms of the magnetic field B, area A and length l of the solenoid through which a current i is passed.

The magnitude of induced electromotive force in a circuit is equal to the rate of change of magnetic flux linked with the coil. 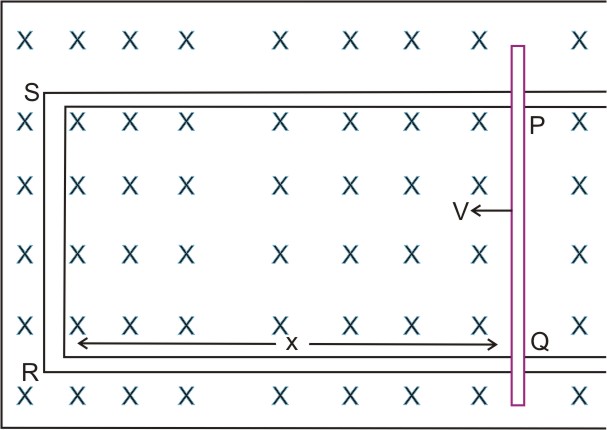 Here the length of the conductor is 'P' which is moving right angle to the magnetic field 'B' with the uniform speed v.

In the figure, the conductor PQ is free to move.

Consider the rectangular loop PQRS. The magnetic flux through the loop is Blx.

where x is length of RQ

When the conductor moves x is varying. So due to the rate of change of magnetic flux an emf is induced in it.

According to Faraday's law of electromagnetic induction

where L = self inductance

The rate of work needed in an electric circuit is

By integrating we get

For a solenoid of  area A and length l, the magnetic field due to the current flowing through is

This course will help student to be better prepared and study in the right direction for NEET..