(a) State the working principle of a meter bridge used to measure an unknown resistance.

(i) why the connections between the resistors in a meter bridge are made of thick copper strips.

(ii) why is it generally preferred to obtain the balance length near the mid - point of bridge wire.

(c) Calculate the potential difference across the

resistor in the given electrical circuit, using Kirchhoff's rules.

Meter bridge is the simplest practical application of the Wheatstone bridge that's used to measure an unknown resistance.

It's working is based on the principle of Wheatstone bridge.

Working of a meter bridge:-

On moving the jockey along the wire, the galvanometer shows no deflection, that's said to be the balanced condition of the Wheatstone bridge.

If P and Q are the resistance of parts AB and BC of the wire, then for the balanced condition of the bridge, we have

the resistance of the wire of length l

where , s is the resistance per unit length of wire. Hence,

Knowing I and R, 'S' can be determined as unknown resistance.

(b) (i) Since the resistivity of the copper wire is very low, that's why the connections between the rsistors in a meter bridge are made of thick copper strips.

So, the connections are thick, hence the are become very large and the resistance of wire becomes almost negligible. 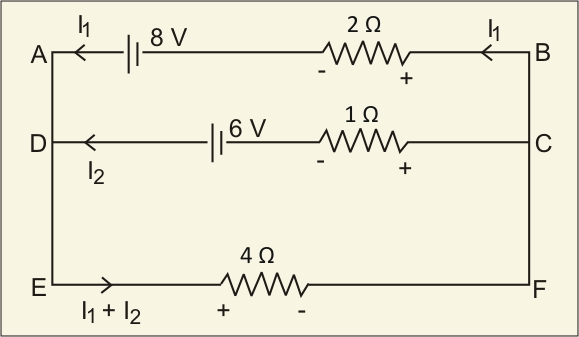 To determine the current,

The net current across

resistor is given by,