State the underlying principle of a cyclotron. Explain its working with the help of a schematic diagram. Obtain the expression for cyclotron frequency. 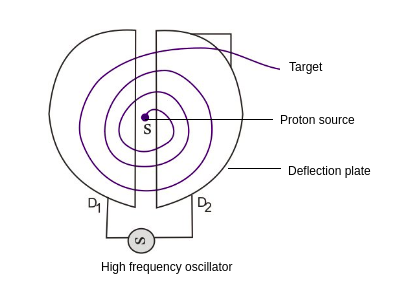 When a positive charge q of mass m is emitted from the source, it is accelerated towards the Dee having a negative potential, due to normal magnetic field, the ions experience a magnetic force and moves in a circular path. When the charged particle arrives at the gap between the dee the polarities of the Dee changes and in the gap the charged particles gain extra velocity and is then transferred to the another Dee making a circular path with the greater radius.

Let us consider the charge on the positive ion is +q, its mass m and strength of the magnetic field is B.

At any time, 'r' is the radius of the circular path and 'v' be the speed of the particle. Then, on equating the centripetal force and Lorentz's force, we have

Now, to complete the circle of 'r' the time taken is given by -

on substituting the value of r, we get

Hence, the required expression is -