Nitrogen is one of the primary nutrients critical for the survival of all living organisms. It is a necessary component of many biomolecules, including proteins, DNA, and chlorophyll. Although nitrogen is very abundant in the atmosphere as dinitrogen gas (N2), it is largely inaccessible in this form to most organisms, making nitrogen a scarce resource and often limiting primary productivity in many ecosystems. Only when nitrogen is converted from dinitrogen gas into ammonia (NH3) does it become available to primary producers, such as plants.

In addition to N2 and NH3, nitrogen exists in many different forms, including both inorganic (e.g., ammonia, nitrate) and organic (e.g., amino and nucleic acids) forms. Thus, nitrogen undergoes many different transformations in the ecosystem, changing from one form to another as organisms use it for growth and, in some cases, energy. The major transformations of nitrogen are nitrogen fixation, nitrification, denitrification, anammox, and ammonification (Figure 1). The transformation of nitrogen into its many oxidation states is key to productivity in the biosphere and is highly dependent on the activities of a diverse assemblage of microorganisms, such as bacteria, archaea, and fungi. 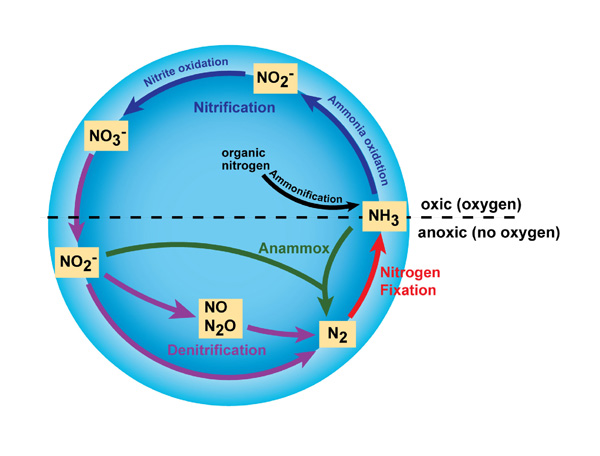 Since the mid-1900s, humans have been exerting an ever-increasing impact on the global nitrogen cycle. Human activities, such as making fertilizers and burning fossil fuels, have significantly altered the amount of fixed nitrogen in the Earth's ecosystems. In fact, some predict that by 2030, the amount of nitrogen fixed by human activities will exceed that fixed by microbial processes (Vitousek 1997). Increases in available nitrogen can alter ecosystems by increasing primary productivity and impacting carbon storage (Galloway et al. 1994). Because of the importance of nitrogen in all ecosystems and the significant impact from human activities, nitrogen, and its transformations have received a great deal of attention from ecologists.

This course will help student to be better prepared and study in the right direction for JEE Main..