A flask contains a mixture of isohexane and 3-methylpentane. One of the liquids boils at

while the other boils at

As we have learnt,

Simple distillation is a procedure by which two liquids with different boiling points can be separated. Simple distillation can be used effectively to separate liquids that have some major degrees difference in their boiling points. As the liquid being distilled is heated, the vapours that form will be richest in the component of the mixture that boils at the lowest temperature. Purified compounds will boil, and thus turn into vapours, over a relatively small temperature range (2 or 3°C) by carefully watching the temperature in the distillation flask, it is possible to affect a reasonably good separation.

As distillation progresses, the concentration of the lowest boiling component will steadily decrease. Eventually, the temperature within the apparatus will begin to change; a pure compound is no longer being distilled.

Steps to be followed in simple distillation process:

(i) Take a mixture(Acetone and water) in the distillation flask fit it with the thermometer.
(ii) Arrange the apparatus as shown in the given figure.
(iii) Heat the mixture slowly keeping a close watch on thermometer.
(iv) Since the acetone has lower boiling point starts vaporises and condenses in the condenser which is finally collected in the beaker.

Note: Simple distillation is effective only when separating a volatile liquid from a nonvolatile substance. If the liquids comprising the mixture that is being distilled have boiling points that are closer than 50 degrees to one another, the distillate collected will be richer in the more volatile compound but not to the degree necessary for complete separation of the individual compounds.

Fractional distillation is used for the mixture of two liquids which differ in their boiling point by 10-15 K. It is a type of distillation which involves the separation of miscible liquids. The process involves repeated distillations and condensations and the mixture is usually separated into component parts. In this method a fractionating column is used to increase the cooling surface area so that ascending vapour phase become richer in more volatile component and descending liquid phasebecome richer in less volatile component.

The basic principle of this type of distillation is that different liquids boil and evaporate at different temperatures. So when the mixture is heated, the substance with lower boiling point starts to boil first and convert into vapours.

Fractinal distillation is used for seperation of 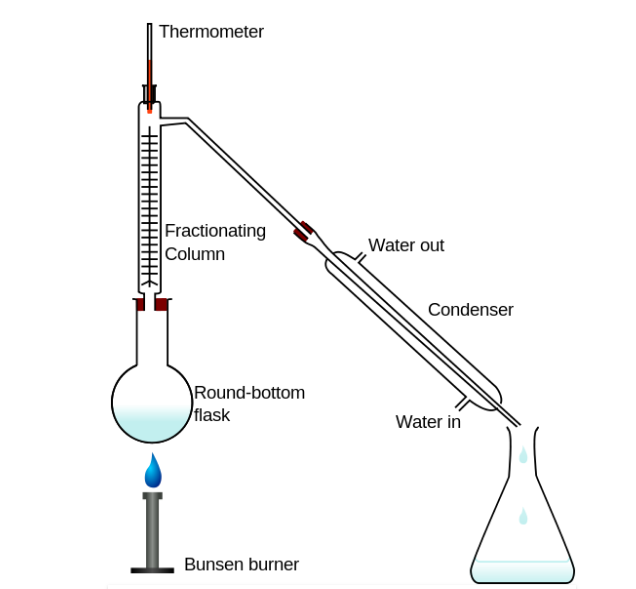 Steps to be followed in fractional distillation process:

1. After setting up the apparatus, a mixture of two miscible liquids A and B is taken where A has more volatility than substance B.

2. The solution is added into the distilling flask while the fractionating column is connected at the tip of the flask. Heat is applied which increases the temperature slowly. The mixture then starts to boil and vapours start rising in the flask.

3. The vapours are from the volatile component A. The vapours then start moving through the fractionating column into the condenser where it is cooled down to form a liquid which is collected in the receiver.

Throughout the process, vaporization and condensation take place repeatedly until the two mixtures are separated completely.