Go To Your Study Dashboard
# NCERT

(i) Binary fission- In this type of asexual reproduction, a single cell organism is divided into two halves. Amoeba can reproduce by this method. It begins the process of reproduction by the division of its nucleus into two nuclei. This is followed by the division of its body into two, each part receiving a nucleus. Finally, two amoebae are produced from one parent amoeba

(ii) Budding- In this method developing of new individuals is by the bulges and they are called buds formed on the parent body.

These type of asexual reproduction is common in Hydra. In hydra, the new individuals develop as outgrowths (called buds) from a single parent. While being attached to the parent, develops into smaller individuals and when these get matured, they detach from the parent and become individual ones. 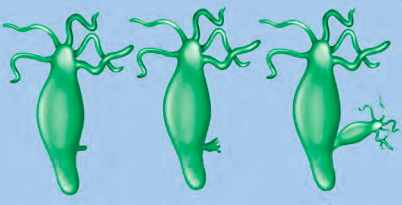