Go To Your Study Dashboard
# NCERT

Consider a sphere of radius R with charge density distributed as

a) Find the electric field at all points r.
(b) Suppose the total charge on the sphere is 2e where e is the electron charge. Where can two protons be embedded such that the force on each of them is zero? Assume that the introduction of the proton does not alter the negative charge distribution.

a) The charge density distribution expression in the sphere tells that the electric field is radial. 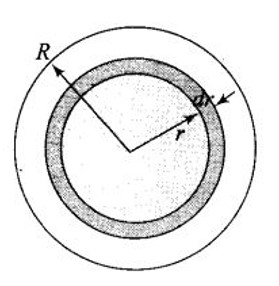 .
Let us first consider for point

, electric field intensity will be given by,

As charge density is positive, it means the direction of E is radially outwards.

, electric field intensity will be given by

Here also the charge density is again positive. So, the direction of E is radially outward.

(b) The two proton must be placed symmetrically on the opposite sides of the centre along a diameter. This can be shown by
the figure given below. Charge on the sphere,

The proton 1 and 2 are embedded at distance r from the centre of the sphere as shown, then attractive force on proton 1 due to charge
distribution is

and repulsive force on proton 1 due to proton 2 is

Thus, net force on proton 1 will be zero, when

Hence the protons must be at a distance