What is Chemical Bonding and Molecular Structure

“What You Lack In Talent Can Be Made Up With Desire, Hustle And Giving 110% All The Time.” – Don Zimmer

Chemical bonding is the study of bonds that exist between the atoms or molecules. This chapter explains why only certain atoms combine with each other and make a new product and their arrangement in a definite shape. There are various theories such as VSEPR, valence bond theory, the molecular orbital theory that will explain all the phenomena in details. Bonding is not just an instance but it is nature's way to take every atom or molecule to its most stable state.

All the structures that exist in the universe are the result of the formation of certain kinds of bonds. This bonding in real is actually nothing but combining one atom to the other. This combination of different atoms or “bonds” occurs in several ways as follows:

(i) Ionic bond: Bond takes place after the complete exchange of electrons.

(iii) Hydrogen bond: Bond takes place between a hydrogen atom and some most electronegative atoms like oxygen, nitrogen, and fluorine.

The general structure of the chemical bond

In our body itself, all the macromolecules like DNA, RNA, proteins, etc are held together with the help of this chemical bonding. All the structures are held together with the help of this chemical bond, either the bond is stronger or weaker. Based on the strength of the bonds, the stability of the structure is determined. The melting point, boiling point, etc are the important properties that are determined by the strength of the chemical bond. This chapter is usually liked by every student as it is very easy and it holds enough distribution of marks in Board exam and other competitive exams like JEE and NEET.

There are the following important topics that are covered in this chapter:

(iii) Coordinate bond and exceptions to the octet rule

(ix) Hybridization and its types

(i) Ionic bond: In this type of bond, metals and non-metals take part in the bond formation by the complete exchange of electrons as depicted in the picture below:

(iii) Covalent bond: This type of bond formation takes place by the sharing of electrons between the non-metals. The picture given below shows its representation.

In this chapter, you will learn about the Lewis dot structures. Lewis dot structure is the simple representation of the molecules formed by the covalent bonds. But in this concept, a geometry of the molecules needs to be determined, which is one of the major drawbacks of this concept. So to overcome these drawbacks, several advanced theories have been given by the scientists and they are VSEPR, VBT, and MOT.

(iv) Kossel Lewis Approach: This is the simplest model for explaining the structures of the chemical bond. This approach considers the central atom as sphere and electrons as point charges around it. Now, these point charges electrons are shared between atoms or completely exchanged between atoms and form the covalent and ionic bond respectively. After the formation of these bonds, all the atoms engaged in bonding achieve the stable noble gas configuration.

For example, BeF2  This bond is not explained by VSEPR and VBT, thus hybridization explains its bond formation and structure. This is explained below: 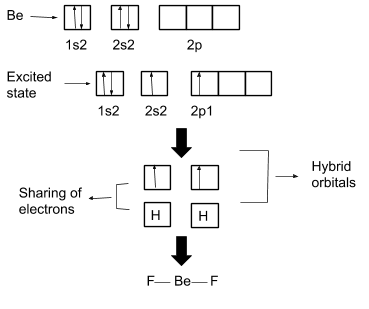 Finally, at the end of this chapter, you will learn about a new theory i.e “Molecular Orbital Theory”. This theory is applicable to only diatomic molecules like O2, N2, F2, etc. This theory explains several things like electron distribution in bonding and antibonding molecular orbitals, bond order, paramagnetic or diamagnetic nature of molecules.

How to prepare for Chemical bonding?

Although this chapter is a part of physical chemistry it is completely theory-based chapter. For preparing this chapter, formula or numerical practice is not required. For solving the questions of this chapter, first, you must have a complete understanding of Atomic structure and classification of elements and periodicity in properties chapters. For a good hold in this chapter, you must give a mock test after completing the theory and you need to go through class 11th NCERT book thoroughly.

For chemical bonding and molecular structure, first, you need to finish the theory thoroughly from the NCERT book and then solve the examples and questions given in the book. Apart from this, if you want to prepare for the advanced level for competitive exams like JEE and NEET, you must read the book - O.P Tandon or P. Bahadur. Meanwhile, in the preparation, you must continuously take the mock tests for internal assessment.